You are here: Home / Notes From Marinda

I’m very excited to begin publishing articles and would love for you to return in the future to see my new blogs. 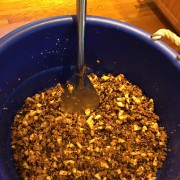 Notes From Marinda
Click here to see my latest posts