You are here: Home / Notes from Marinda / Making Mincemeat

What’s mincemeat, you ask? It’s not that stuff sold in jars in stores. That’s fake mincemeat – just filled with raisins. No meat. Yes, there’s meat in mincemeat. There’s also suet.  What’s that? Suet is raw beef fat from around the joints and kidneys that has a low melting point. It’s recommended for some Japanese dishes as well as being used in classic British Christmas pudding.

I didn’t have an oval washtub like the one used when my grandmother made the mincemeat so I borrowed a plastic ice tub from a friend. I bought a sturdy 24-inch long stainless paddle at the restaurant supply store for stirring and went shopping for other ingredients. My brother found the suet and the beef shoulder at two different butcher shops, and bought a grinder for the Kitchen Aid mixer to grind the beef after it was cooked (simmered in water).

We started by chopping apples – 9 pounds worth. Then added other ingredients to the tub – 6 pounds ground beef, 3 pounds chopped suet, 4 pounds raisins, 4 pounds currants, 1 pound candied citron. In the last couple years, there have been buddha’s hands (another name for citron) sold in the local market. I never saw fresh citron growing up. When I read the recipe for making candied citron it said, “this is nothing like that horrible green stuff” which is what I didn’t like in the mincemeat as a child. I bought 4 buddha’s hands and made some “fresh” candied citron. It has a light lemony fragrance. They are delicious when candied.

Here’s Rob with the bowl of the ground meat. He’s zesting the lemons. 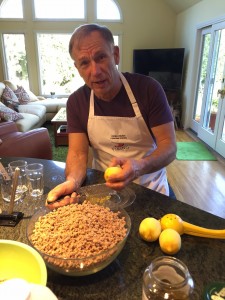 I’m chopping the suet in the food processor after it was cut into pieces and frozen. This is not from the original recipe. My father and aunt added this timesaver in the 1980’s – much easier than chopping the suet by hand. I do have the wooden bowl and metal chopper they originally used.  A note about the suet.  When Hunter brought it home, it had blood and gristle included.  I mentioned we would need to render the fat – heat it, melt it and then strain it so it is cooked and clean, since everything we are putting in the mincemeat is cooked or doesn’t need to be such as dried fruits.  He decided to go back to the butcher and buy the rendered suet. 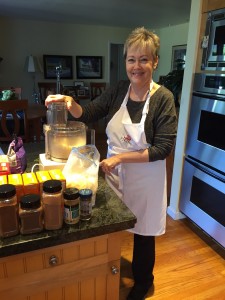 We started by chopping apples – 9 pounds worth. Then added other ingredients to the tub – 6 pounds ground beef, 3 pounds chopped suet, raisins, currants, and candied citron. In the last couple years, there have been buddha’s hands (another name for citron) sold in the local market. I never saw fresh citron growing up. When I read the recipe for making candied citron it said, “this is nothing like that horrible green stuff” which is what I didn’t like in the mincemeat as a child. I bought 4 buddha’s hands and made some “fresh” candied citron. It has a light lemony fragrance. It is delicious when candied.  Here’s the buddha’s hands being cut up to be candied. 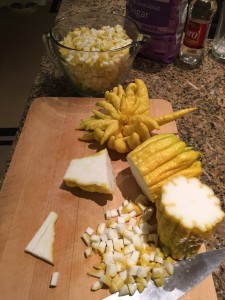 I bought lemons and oranges – and followed similar steps as with the candied citron. I cut the peel into strips, simmered them in syrup, drained them and spread them out to dry. After the candied peel had dried, I cut it into small pieces.  Here’s the orange peel cut up. 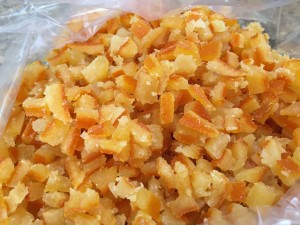 We added to the tub – the 1 pound of candied citron, 2 pounds candied orange and lemon peel, plus 4 pounds raisins and 4 pounds currants. 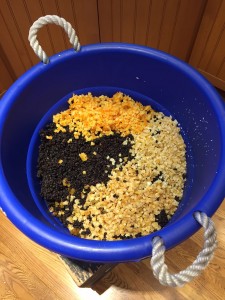 Then we added the spices – allspice, cinnamon, nutmeg, cloves, and ground ginger. 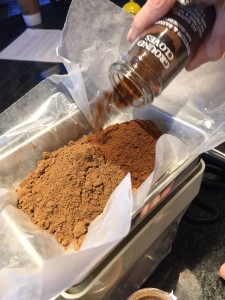 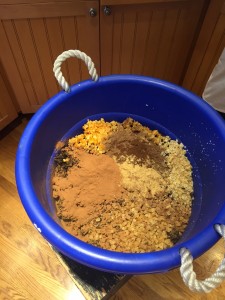 Next went in the 2 pounds of sugar, 3 lemons – zest and juice. Time to stir it up. Here’s Hunter taking a turn stirring. 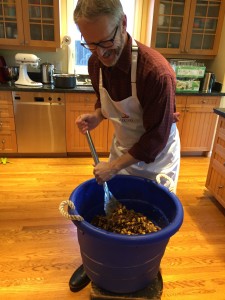 Finally the liquid the beef was cooked in was simmered and reduced in quantity and added to the mix along with cider and molasses. And the salt and pepper. More stirring.  It’s a group effort. 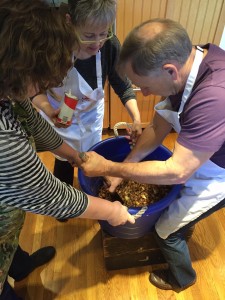 After it was all mixed up, my brother and I tasted the mincemeat. We both agreed that it tasted quite familiar – just like what we had growing up.  We filled up the quart glass jars with mincemeat. 19 quarts in total. 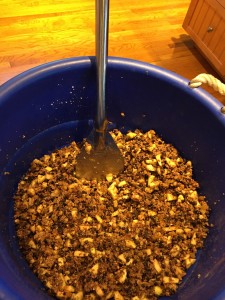 Here’s Hunter, Christine, Marinda and Rob – displaying our results. Everyone took some jars home to put in the refrigerator or the freezer. Those in the fridge can be used in 3-4 weeks to make mince pies.  Can’t wait! 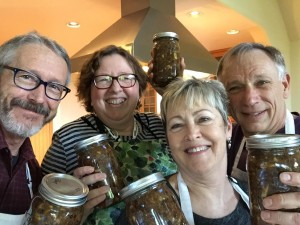