You are here: Home / Notes from Marinda / Mincemeat Pie 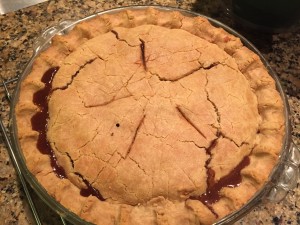 This pie was required eating at Thanksgiving and Christmas when I grew up. Here’s the recipe to make the pie. I made a gluten free crust.

Filling:
I quart of mincemeat (see previous post)
5 cups chopped tart apple (peeled & cored)
1/2 to 1 cup sugar (depending on the sweetness of the apples)
Mix the above ingredients in a large bowl and set aside.

You can make this by hand. I used my food processor as it is easier for this recipe. Mix together flour, sugar and salt. Put in food processor with coconut oil or butter and mix until crumbly. Add egg and mix in. Add cold water a Tablespoon or two at a time until it is mostly a ball. Take out of food processor and mix a bit more by hand. Divide into two balls. Roll them out between wax paper to about 6-inch diameter and put in the refrigerator to chill. (This is where I stopped and made the second batch of piecrust.) The dough is quite soft, so chilling it in the refrigerator makes it easier to roll out.

Divide the filling between the two pie shells. Roll out the top crusts as you did for the bottom crust. Make some slits in the pie for air to escape.

You can wrap and freeze the second pie for later! 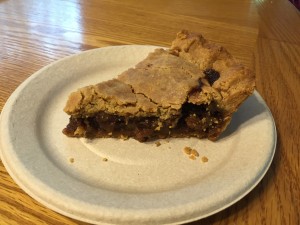 Start at the End
Scroll to top
Click for Accessibility